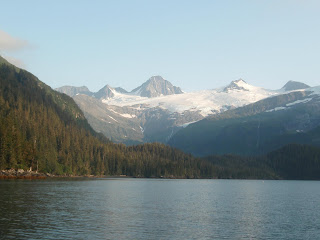 Much to my relief day 6 brought some rest and recovery. After an easy morning Gayle and I headed into town to visit another farmer’s market for some fresh veggies. Then we drove over to the federally funded Alaska native hospital, where they have a magnificent gift shop, full of handmade native Indian crafts. We visited a few other similar shops, where it was fun to see the hand-crafted furs, leathers, knives, spirit masks and related items made by various local tribes.

This afternoon Gayle treated me and Ryan to massages at the Laughing Lotus Yoga studio in Anchorage, where Alanna helped work out our sore muscles from fishing and hiking. I understand we’re going back there in the morning for some actual yoga, which should be a great follow up to the massage today.

From massage, we headed into downtown Anchorage to meet Gayle and Bill for a Segway tour. Our guide was actually from Baltimore, a school teacher and has been living in Alaska for 6 years or so. On our first stop his local history facts were being corrected. By the second or third stop Gayle was outright in charge of our education of local facts and information. 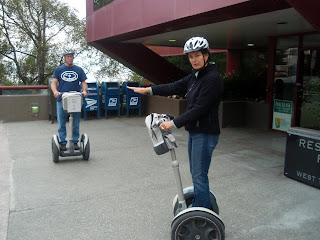 It was fun to hear about her experience during the 9.2 magnitude Good Friday earthquake of 1964, which lasted 5 minutes. No building in Anchorage is older than 1915, which is the year after they completed the Alaska railroad.

Bill chimed in with some interesting facts as well, talking about how the salty and fresh waters mix in the inlets, forming large ice chunks in the winter. This is due to the fact that fresh water freezes faster than saltwater, so large chunks of frozen fresh water float around in the salty water. So when the ships come in to dock, they must do so at an angle, bow first, creating a V-shape to the dock while waiting for the ice chunks to get pulled out with the changing water levels (hope I got that sorta right, Bill).

We stopped on the bridge over Ship Creek, near the Alaska rail station (where the train from Fairbanks had just arrived). We saw hundreds of salmon, and the creek was lined with local fishermen, just out to catch some dinner, right there in downtown.

After our tour we headed to dinner to Simon & Seafort’s, though the server informed us there were no such people by those names. I had some wonderful king crab cakes, while the other three dined on king salmon and quinoa.

It was a wonderful, relaxing day. Our weather luck has continued to hold, though the wind picked up tonight so my hosts have predicted rain tomorrow.