(Side note: I’m getting lots of private messages from folks who have interesting and related Alaska stories of their own, or just funny comments. Please feel free to share your story or comment here on the blog, because I know others would enjoy the information I’m getting from you guys!) 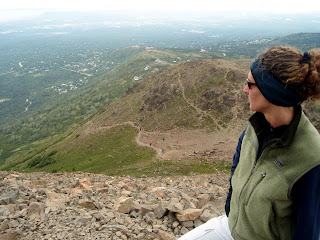 Day 7 began with another trip to the Laughing Lotus Yoga studio in Anchorage. What I did not realize is we were going for “hot yoga” (not that I would have known what that meant). In spite of my years of activities and fitness, I’ve never quite gotten into yoga. For those who don’t know, hot yoga is done in a room kept around 105 degrees. Finally, I thought, I have an advantage over these locals. This southern girl is just getting warmed up at that temperature!

The instructor made his way to my corner before class began to inquire if I’d ever done hot yoga before. When I told him I’d only done yoga one time in my life, I think he tried to conceal his concern for me. So, thinking it would reassure him I added “but I’ve done Wii Yoga!” He ALMOST managed to refrain from rolling his eyes at me.

I hadn’t eaten before-hand, so it was when I heard him later, across the room, telling someone to “always eat before hot yoga” and “if you think you might throw up, leave the room first” that I began to worry.

Hot yoga is also called Bikram yoga and it works the entire body. Fortunately, I am a stickler for stretching after exercise and I get regular massage. And (laugh if you will) I really do think the Wii Yoga has helped improve my balance. I managed to hold my own and complete all of the poses, even if they weren’t pretty or graceful (and trust me, they weren’t)!

After 90 minutes of yoga in the sauna, it was actually refreshing to walk outside again, even though the temps are cooler today and it’s pretty well clouded over. When Gayle and I got home Ryan met us at the door and (having been relaxing all morning) asked: “Are you ready to go hike Flattop?” Hmmm. Since I felt like a big ball of mush I wanted to answer “bite me” but that isn’t the yoga way, now is it? So… instead I smiled (and, since I knew it wasn’t really a question) said: “Sure, just need to grab a shower… whilst you prepare my lunch (of course)!”

So, off we went to hike Flattop Mountain Trail. The elevation at Flattop is 3,550 feet, or just under that of Alyeska. Fortunately, to hit the trail you drive up part of the mountain, so that your total climbing elevation is 1,252 feet. Thank goodness too, because these Roth’s are wearing me OUT. The climb proved to be quite challenging. Early on the effort required feels minimal (unless you’ve already been Halibut fishing, mountain climbing and twisted up like a pretzel in the prior 3 days). 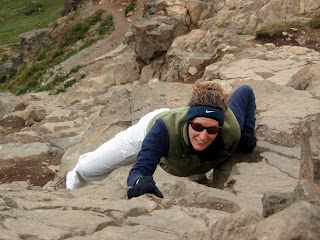 I was dragging to start, but got my much needed second wind in time to start the vertical ascent to the top. When I say vertical, I mean thank goodness I had a little rock climbing training a couple weeks ago, because I was using both hands and legs.

Oh and another thing – all along the trails of these mountains we’ve been hiking have been these little purplish berries. Ryan calls them blueberries but I’ve got to say – that ain’t how we grow ’em in the south. They can’t be any bigger than a green pea, and most are smaller. Though now that I see these here in Alaska I understand why, the day I made blueberry pancakes for Ryan in Knoxville, he was shocked at the size of the berries going into the mix. In fact, he told me those berries were “too big for pancakes!”

We reached the top of Flattop and literally, as we crested the side of the mountain we were met with winds easily reaching 35 mph or more, and a 20 – 30 degree drop in temperature. It was well worth it though, as we were rewarded by magnificent views of the Cook Inlet and Turnagain Arm, as well as Chugach Mountain Range around us, and Anchorage below us. 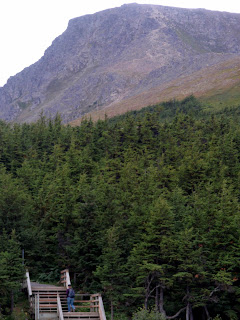 Here is a shot of Flattop from the parking lot. We climbed our way to the very top of that mountain. And yes, it’s as steep as it appears.

Returning to Gayle’s, she and Bill had a full meal of Alaskan King Crab legs, steamed broccoli, cabbage and green salads going. Another fantastic meal in Alaska!

Now we are all busy preparing for our weekend trip to the cabin at Horseshoe Lake. I don’t know any more than that, except Ryan and I might be heading to Denali first. But, just like me, you’ll have to stay tuned to find out what happens next!