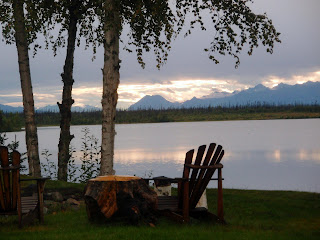 The final two days in Alaska were spent at Gayle’s cabin on Horseshoe Lake. I had some initial concerns at the prospect of using an outdoor, unheated shower, when highs were only expected to reach 60 or so, and no sunshine was forecast. Turns out that concern was misplaced – we just didn’t shower! Unlike being in the south however, we also did not sweat, so never got terribly icky. Still, Sunday afternoon’s return to indoor plumbing and hot showers at Gayle’s house in Anchorage was not unwelcome.

Saturday morning we awoke to breathtaking views of the sun peeking through the clouds and covering the mountains in the distance and across the lake. The large windows across the front of the cabin allowed us to literally wake up to this view. I just opened my eyes and there it all was. 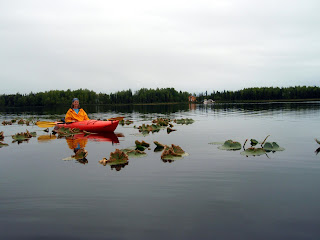 The lake was as smooth as glass in the morning, so Ryan and I headed out in the kayaks for a tour of the lake. We were escorted on our paddle by loons, diving for breakfast, and cheered along by the sandhill cranes. As we inched through the lily pads, one of the small fish jumping around us almost landed on the front of my boat.

As we arrived back at the dock, we were greeted by Bill, who was busy fiddling on the boat or the float plane, or both – I’m not sure because he was moving so fast. The drive to Horseshoe Lake from Anchorage takes about 1:45, but Bill can just walk out the front of Lake Hood Inn, hop in his plane, and be at the front door of the cabin in about 15 minutes. 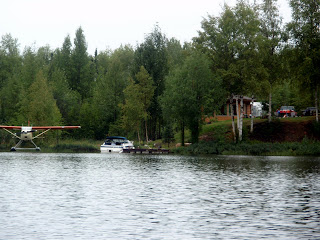 Gayle was already busy fussing over preparations for yet another festive gathering that evening. Though we all stopped for breakfast of poached eggs, bagels and oatmeal, before hopping in the boat to motor over to visit with Karen and Roger Pfeifer.

The Pfeifer’s also have a cabin on , around the horseshoe from Gayle. Karen’s son Sloane Unwin was just married two weeks prior and they held the reception at the cabin. The Pfeifer’s cabin was creeping along in early stages of renovation/addition around March, when they learned of the plans to use the cabin for wedding reception. Because they had a 5 week trip to already scheduled for May/June, they were quickly under the gun to finish MUCH earlier than planned.

By their account, it wouldn’t have been finished without Gayle and Bill pitching in to ensure electrical, insulation and sheetrock were all completed. Gayle and Bill even continued working after the Pfeifer’s had gone on vacation. Such is the way it is here. Family, friends, neighbors – people here just do.

In the week before we arrived, a very good friend of this group, Nancy, was hit by a car while biking to work. Throughout our stay we’ve heard regular updates on her pelvic, hip and back surgeries, from folks who go to the hospital daily to sit with her, and offer some time for her husband, Doug, to get out of the hospital a bit.

People here do not stop to question if they have time or can work something into their schedules, or even if they can afford it. When someone here needs help, others simply stop and help. I don’t know if it’s the remoteness of it all, drawing the community in closer, or if it is the general overriding sense of being one with nature, here in this state where you can hardly think of a thing to do that can’t be done within a couple hours drive, but it’s a beautiful sense of humanity that makes you feel like you’re home. 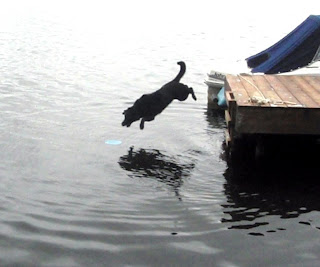 The Pfeifer’s also have a dog named Tarmac, a dog well trained to retrieve ducks during hunting season. As you can see, he’ll also dive in head first for a simple Frisbee! Tarmac and his brother Tundra joined us that evening for our dinner cookout, when the Pfeifer’s, as well as Sloan and his new bride Rebecca, came over.

Also joining us for the day was Cherie Anderson, Gayle’s sister. Cherie, like Gayle, is an interesting and intriguing lady. Cherie is well educated in essential oils, and was kind enough to bring a special concoction with my name on it. Thanks to the White Verbena, it has all my favorite anti’s: antibacterial, antiseptic, anti-anxiety, and much more!

In time for dinner we also had one more guest, Leo von Scheben. Leo was appointed by Palin as the Commissioner of Department of Transportation. Prior to that he was principle in USKH (Unwin, Scheben, Korynta, Huettl), where Gayle worked for 25 years. Leo has done surveying, industrial engineering, civil engineering, and has an MBA. Leo lives on and has had a very interesting life. I wish I’d had more time to chat with him. 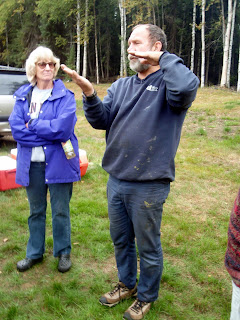 One more very interesting life is that of Roger Pfeifer, by whom I was very intrigued. Roger is married to Karen (Unwin) Pfeifer, whose husband Gordon Unwin was also a principle in USKH, but was lost in a helicopter accident 19 years ago. Roger tells it like it is, something I greatly appreciate, even if the story is less than flattering.

One story that IS flattering however, is Roger’s 1982 climb to the top of the 20,320 ft . I couldn’t get enough information from him about this, and he probably grew tired of my incessant questions (how many people, what did you eat, how long did it take you, did everyone make it, how bad was the weather, etc.). It took his team 38 days (34 up, 4 down), and they lost two team members on the way (they both lived, just didn’t make the peak). In spite of consuming 6,500 – 7,000 calories per day, Roger lost 35 pounds in those 38 days.

Roger is some kind of interesting. He made his way to from , via the Army, which sent him to to fly helicopters. He fell in love with , like so many have, and never left. You can see the sparkle in Roger’s eye as he starts describing the vast array of activities available at his doorstep. He’s a hop, skip and a jump away from retirement after a couple decades with FedEx, and would love to offer vacation planning for folks traveling to who aren’t sure how to pack everything has to offer into their 14 day once-in-a-lifetime visit. He clearly wants everyone to experience the joy he has in this state.

We sat around the campfire until late into the night, drinking Alaskan ales and philosophizing about life and pondering the deeper meaning of it all, thanks to Bill who kept posing thought-provoking questions. I’m pretty sure we sketched out the path to world peace that night… if only we hadn’t accidentally dropped the map in the fire. Shoot, I guess we’ll have to do it again.

Sunday morning we repeated our breakfast from Saturday. Ryan went kayaking and fishing for trout. He said the fishing was great, the catching – not so much. Gayle and I sat on the end of the dock watching Bill and Ryan do touch-and-go’s in Bill’s plane on the lake. Finally it was time to pack up and head back to , where we all headed straight to a hot shower, and Ryan and I began packing up for our return to the lower 48.

We left with far more than we brought, including a 42 pound box of Halibut. I left with more than can be measured by a scale – a new understanding and appreciation for The Last Frontier, a lot of sore but happy muscles, almost 1,000 pictures, and the love and joy of more new family members than I could have imagined.

My deepest thanks to all the Roth’s, Anderson’s, Pfeifer’s, and all the other family and friends I made in over the past 10 days. Thanks for the stories, the history, the experiences, for making sure Ryan and I had a wonderful time, but mostly for allowing me to become part of your wonderful family. 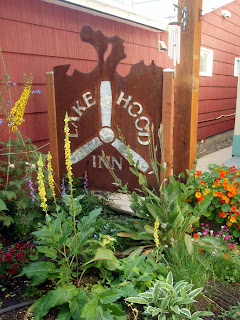 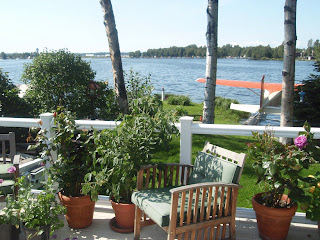