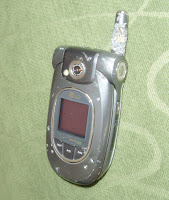 I finally decided to join the ranks of life bloggers and so I must begin with a (now entertaining) story from the last 24 hours. While replenishing the dog water bowls in the back yard at my boyfriend’s house yesterday I apparently set my cell phone down and left it.

I was in the car later when I noticed it missing, but thought I’d left it at my house. We started calling the phone when we got back home and listened for it in my house, in my car, in the yard… nothing. When he got back home he did the same thing there (which is where we both expected it to be). By then it had quit ringing and was going straight to voice mail (which perplexed us because it had a full charge).

In a flash of clarity I told him to go look on his partially completed deck near the water faucet. He found it outside alright, in pieces with large teeth marks through it, left by “the bad dog,” his Weimaraner. I was very angry, but soon became perplexed. Why did the phone ring for so long and then stop, indicating the phone was fine, until just before he got home.

So I pondered for a bit about how/what happened in the yard with the bad dog and the phone and have created what I consider to be a very plausible scenario, and it goes something like this…
The phone sat out in the hot sun in the yard and went completely unnoticed or at least was completely uninteresting to the bad dog. …Until it started ringing (when we started calling to try to locate it)… it probably rang a time or two and she thought… what the?? So she goes over to check it out and discovers that it isn’t only ringing, it’s also… vibrating. Wow, what a cool, interesting little toy. For the rest, I’ll let the bad dog speak for what I believe are her own thoughts:
Now, dad’s never given me a toy like this but… what else could it be? It rings and buzzes like a toy. I don’t know why it just started doing it all on its own but… I wonder if I can squeeze it like I do my other toys and make it keep ringing and buzzing like that. Hmm… so far this chewing thing isn’t reall…. OH SH**… it’s WORKING!! Hot damn… although it seems like I was squeezing in the same place just then as I was before… why did it work that time? Who cares, this is TOO cool… wait till Hayley (aka: the good dog) sees THIS… she’ll be so jeal… oh crap, it stopped again. Huh… lemme try over he… YEAH!! There it goes AGAIN… AWESOME!! Man, I am loving this thing, although the mechanism to make it play doesn’t seem very consistent. It stopped again and I’m doing the same thing. I wonder what happens if I chew on this pointy thing sticking down here…. huh… noth…. OH YEAH… THERE IT IS!! This is the most fun I’ve had in weeks. Man, I don’t even know where this came from but I hope there are more. Oh no, it stopped again. Maybe if I could get inside… how could I… OH, there goes that piece off the back… hmmm… this shiny thing inside looks like it might have something important to do with the noise… lemme OH OH OH… it’s working again!! Such a strange little toy lemme give this shiny thing here a tight squeeze… yeah, that’s it… oh… what’s that funny smell… it smells like ice cream… I love ice cream… maybe there’s some inside… but wait… why did it stop ringing. Come on and ring again fun little toy!! Oh shoot, I guess it’s broken. Oh well, I hated that stupid toy anyway. I think I’ll just chew on this pointy thing on the end till dad gets home. Maybe he’s bringing me more of these….

People seem shocked now when I tell them I’m actually still using the phone. At the Verizon store the rep offered me a loaner to use until I could decide on an upgrade (this, after telling me my data was gone). I continued to press him on getting my data so he tried putting a new battery and… the phone turned on and the data was all there (I’ve since discovered the joys of Verizon’s virtual data storage as back up)! In the meantime, I told him I’d rather keep my phone, crazy lines through the display and all… so it LIVES… although clearly its days are numbered. Apparently I’m one of those people who develop crazy, inexplicable attachments to their phone. That, or I just love the smell of dog breath. Bad dog breath even.

(For the record, the insides of a Lithium Ion battery smell vaguely of ice cream, something you may notice the next time a dog tooth pierces your cell phone battery and you decide to smell it)