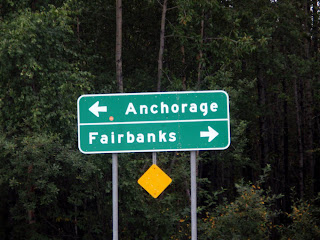 Day 8 we woke up, packed up and headed north, my first time north of Anchorage. We drove to Talkeetna, Alaska, a quaint little town, which offers flightseers trips around Denali (Mt. McKinley). Some offer glacier landings, where you can fly up, get out and walk around the mountains.

For those who don’t know it Denali, meaning The Great One, is the native name for the mountain, and the official Alaskan name for it. In the lower 48 it is widely known as Mt. McKinley, the tallest mountain in North America, at just over 20K feet.

We went first to the Talkeetna Lodge, which I hear offers the best views of Denali, hands down. I can’t say for sure because when we were there, just like around 60 – 70% of the time, you couldn’t even see the base for clouds and fog. Denali is so tall, and it shoots up so dramatically, that it generates its own weather patterns. 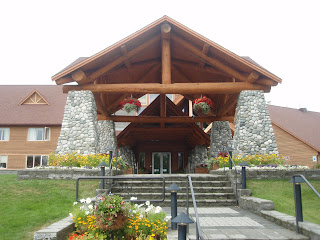 So far this year 1,161 climbers have attempted to reach the summit. Of that number 682 have actually made it. While the forest service didn’t list the next number – Gayle said there have been a couple of fatalities as well.

The main climbing season begins in mid-May and goes through the end of July, with the best climbing recommended in June. Even then climbers encounter temps as cold as 40 below on the mountain. The world map on the wall of the forest service building had pins designating the areas from which climbers have come this season, including North and South America, Africa, Europe and Asia, with a larger number being from Europe.

The average climb takes between 17 and 21 days, so climbers need to take 4 weeks worth of provisions, not to mention all the gear needed for the varying terrain and sub-zero temps. With so much gear required, climbers often end up making “double carries,” where they carry part of their gear from one level to the next, then return and carry the rest. It sounds to me like they are climbing the mountain twice!

Because of the 20K+ foot altitude, climbers can generally climb no more than 1,000 ft per day, to allow their bodies to adjust to the decreasing oxygen levels. It really is an awesome thing just to imagine making a climb of that magnitude. It makes my marathon finish very humbling. 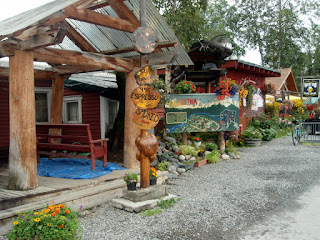 After a quick stop at the Denali Brewing Company, to ensure they were running an upstanding, quality business, we headed south again, turning off just north of Wasilla and heading over to Horseshoe Lake, to meet up with Gayle and Bill at the cabin. 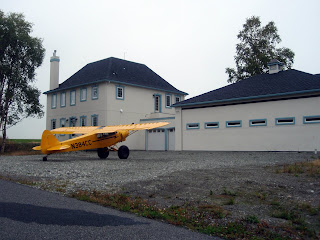 While coming up through Wasilla we did drive by the Palin house, but for all my efforts, I could not see Russia. Bummer. Ok, maybe that’s not exactly what she said. So we arrived at the cabin in time for some of Gayle’s vegetable soup which, like everything she touches, was wonderful. The cabin is on a neat piece of lakefront property, that used to be a gravel pit. The gravel was used as the foundation for the nearby VOR navigational aid for aircraft.

Speaking of aircraft, it is as common a mode of personal transportation here in Alaska as motorcycles are in the south. As you can see below, here in Alaska they just park their planes right in their driveways! 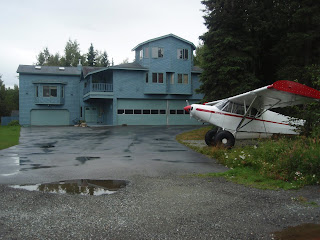 Gayle has managed to grow a full lawn of grass and lots of flowers and plants on the land, in spite of the early soil limitations (note: I understand lots of horse manure was involved in that effort). The cabin, which she and Bill built themselves, is a 16 x 16 square building, with tons of windows and light, and has an airy feng shui feel about it.

She very graciously offered the cabin to me and Ryan, while they took “Lucy,” Bill’s 1957 Silver Avion, which looks very much like an Airstream. So we were able to retire to bed for the night, looking out across the lake at the last bit of light illuminating the mountains across the water, watching the wind softly blow the leaves in the surrounding birch trees and listening to the loons call to each other.