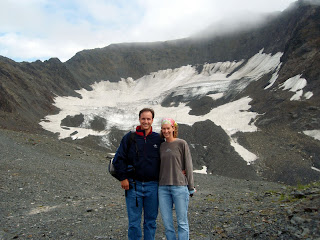 We awoke on Day 5 in Girdwood, at the base of Mt. Alyeska, a ski resort town. Alyeska is an old Aleut spelling for Alaska. Girdwood runs along the Seward Highway, and was forced to move inland after an earthquake in 1964 left the town below the high tide levels of the Cook Inlet. Gayle had friends living there at the time. They moved further inland, along with most other residents, thereby absorbing the Alyeska community into Girdwood.

Gayle, Bill, Ryan and I had stayed in a really neat cabin in Girdwood for the night. In the morning, we checked out and drove over to The Bake Shop in town for breakfast. Naturally we ran into lots of people from last Saturday’s wedding, including the bride and groom. The Bake Shop has some of the best sourdough bread anywhere, and is where I had my first sourdough pancakes.

From there Ryan and I said goodbye to Gayle and Bill, and set off to explore Alyeska. Of course (being married to a pilot) we had to start by driving over to the air strip, which is literally just a long strip of gravel in town.

We pulled off the road to check out a stream and happened upon a group of roughly 10 salmon. We watched them with amazement as they struggled to swim upstream, against a strong downstream flow of water. They stayed mostly together, swimming a little, getting pushed back, resting along the side, and then pressing on. Quite a journey for fish who are simply going to lay eggs and then die, once they get there.

Next stop was the Hotel Alyeska, which is the starting point for the tram heading up the mountain. The tram carries skiers in the winter and hikers/sightseers in the summer. We opted to skip the tram and hike up the almost 4,000 foot mountain. That decision paid off nicely for us. 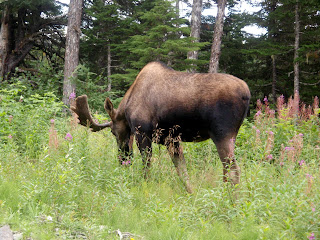 Since I’ve been here I’ve been promised that moose wander randomly through town, and even in and out of Gayle’s yard, but I’d yet to see one. We weren’t 10 minutes into our hike when we encountered a couple large Bull Moose. They approached the trail from our right, as we backed up and gave them space. Ultimately, one crossed the road, we tired of waiting and decided to walk right in between them and continue our climb. They barely batted an eye at us, as we came within 25 feet or so of them. They are so massive, with big, broad antlers. The average adult moose stands almost 7 ft high at the shoulders, and can weigh as much as 1,500 pounds. 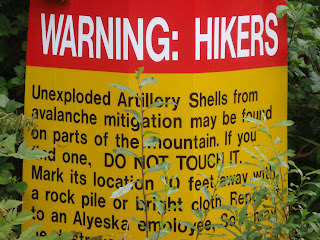 The hike was extremely steep at times, and we saw a sign warning us there may be live avalanche detonation devices along the way which we should not touch. Well, thank goodness they told me not to touch them! Who KNOWS what might have happened without that warning. The hike took us just under 2 hours, and, thanks to another fantastic weather day we were back in tank tops and sweating it out.

As we arrived at the top, we had amazing views of the Turnagain Arm (which I told you about here), the Glacier Bowl (the oh-so-creative name for the bowl-shaped glacier at the top of Alyeska), and all the surrounding mountains. Much of the glacier is melting rapidly, creating a rushing waterfall running down the mountain. 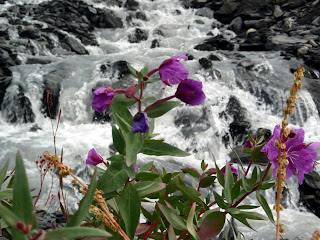 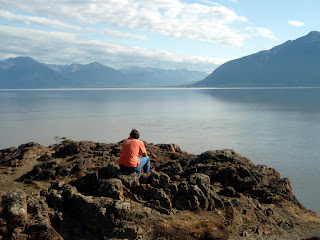 After two full days of challenging outdoor activities we started making our way back to Anchorage. Along the Seward Highway we stopped at Beluga Point, which is where the Boar Tides I mentioned here really gain their traction. We did a little rock climbing out onto a giant rock where we had amazing views of the Turnagain Arm.

As we were leaving we noticed a couple of Dall Sheep across the road. Ryan walked out to within about 30 feet of them and waited with the camera. After a few minutes a baby Dall Sheep came hopping out of the brush and joined its papa for an afternoon snack in the grass. 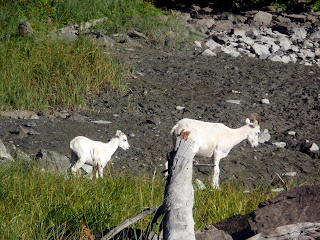 By the time we got back to Gayle’s she was in full swing vacuum sealing Halibut for our us to take home, and getting ready for dinner. She and Bill prepared a wonderful meal with some of the Halibut and Rock Fish we caught yesterday. We also dined on the Halibut cheeks, which some people will tell you is the best eating. The cheek is very different, in that it is more the firm consistency of steak, but flaky and perhaps a bit sweeter than the Halibut filet. I noticed you can buy them online for about $25/pound.

In all, we’ve been spoiled by the fantastic weather and couldn’t be happier about it! I’m hoping Day 6 brings me a chance for my body to recover though…

One thought on “Alaska: Day 5”