We crashed pretty hard last night, although my body woke up promptly at 7 a.m. Too bad that was eastern time so it was just 3 a.m. here! It was overcast in the morning, but that did not deter us from heading to the local farmer’s market Gayle (mom-in-law) recommended. One of the Twitter folks jokingly asked if that’s where they sold ice to eskimos. So I thought it worth snapping a few pictures to show that they not only grow it here, but they grow it big! I’ve never seen zucchini this big anywhere in my life. 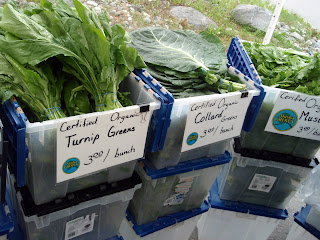 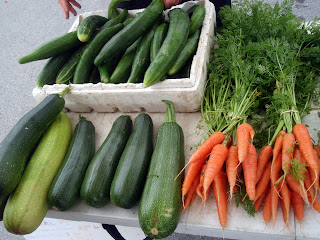 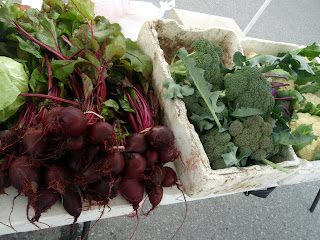 Then we did some shopping at the local REI, so I could stock up on my smart wool and long underwear, preparing for our upcoming activities planned for the week. From there, back to Gayle’s to get ready for Monica Roth’s wedding. Monica is one of MANY cousins I just married into, and attending this event was a little overwhelming, to say the least.

My own family is fairly small, so marrying into and meeting members of my husband’s family, with somewhere around 9 direct aunts/uncles, not to mention spouses, first and second cousins, etc. it is a daunting task to try to meet and keep them all straight. Fantastic folks though, and it’s a pleasure to be here with them.

Apparently I managed to select a dress for the wedding that was a favorite of the bride, because I pretty much matched the bridesmaids perfectly. No kidding, I couldn’t have matched them better if I’d tried. 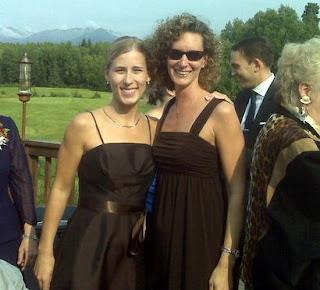 I keep hearing that the moose wander up and walk around in yards and through town, etc. I haven’t seen one yet, but I’m keeping my camera poised and ready for the moment this should happen. I can say with certainty that this place is far more green and comfortable than anyone in the southeast (who hasn’t been here) could imagine. Of course it is August, but still, flowers are blooming, veggies are growing, and yesterday I even sat on the deck with my shirt off and got a little suntan!

Speaking of sun, it’s an interesting thing here. The sun doesn’t “set” as much as it circles us. It moves in an arc-like fashion around us, completely confusing me. I see the sun in the afternoon and assume it’s going down, like the sun does in the lower 48. Thirty minutes later the sun has changed positions, only now it’s due right of where I just saw it in the sky. I can’t count on the direction of the shadows, because they change in odd patterns, keeping my jet-lagged body disoriented to time of day.

Thus concludes day 2 in Alaska. Though the sun is still shining brightly, my body reminds me it’s almost 1 a.m. eastern. More to come…